Quite often you may find yourself looking at a fine piece of sheet music which has been engraved beautifully but alas in in the wrong key...

Perhaps because you are playing a tuba, clarinet or saxophone (transposing instruments) where the other band members are using non-transposing instruments (guitar, cello, flute, piano etc.). Another day you may find that the vocalist will do a much better job when the entire piece would be played a few notes lower or higher. A guitar player probably doesn't like to play in keys needing many barré chords.

As you might have guessed, performing transposition using music notation software like MusiCAD is easy. You might as well just download MusiCAD for free, transpose and print as needed and save your work for future use (no time limit).

Transposing a tune one tone (two semitones) up or down should not be too difficult, so let's try to do so manually.

We'll transpose the well known lullaby "Hush little baby" one note low, so we are going from G-major to F Major. Each and every note must be written one note lower. The note d will become c, b goes to a, a gets g. One more to go. What to do with the c. First guess might be 'b'

That sounds a bit odd, to say the least. Three problems arise:

That looks and sounds more like our lullaby, now in the key of F major with transposed chords and corrected signature.

Now let's see where transposition boils down to the manual/difficult way using a transposition table (if you're only interested in the easy way, you might as well just skip the next section)

As we've seen, to change a tune's key means rewriting every note the same amount of semitones higher or lower.

If you look at a piano keyboard you'll discover that each octave can be thought made up of 12 (chromatic) steps, usually not of equal importance. Seven of them are used much more frequently in most music than the remaining 5. These are the diatonic steps of the c-major-scale.

The table above may help in determining the most likely flats and sharps; it is very unlikely to have an a-sharp in the key of F (in pink), the usual representation will be a b-flat.

Assume a tune written in the key of C-major (the white keys on a piano), bold on the first line in the table below).

If we'd like to play that tune a semitone higher (in C-sharp or C#) we'll be using all black keys and two whites (f and c). Using the table above just use the note immediately below the original, so a c becomes a c#, d becomes a d# an e becomes an f (or the enharmonic equivalent e#).

Now let's suppose you want to transpose your music from the key of A to to the key of F.

First note is easy, that's an A so an F will do. Ehm, which F, a major third down or a sixth up? Let's go down, and do so for all other notes.

Note that transposition from A to F is the same as lowering each note with 4 semitones (four rows higher).

Second note is a G#. So lookup the G# on the row for key A (the original key in blue) found it at stage 7. Now locate key F (pink row) in the same column: ok that will become an E.

Third an A again so we get an F.

Fourth note: C found at stage 3b; in row for key F will render Ab

By now, you may have noticed that transposing a major third down turns out to be writing each note-head one staff line lower (and accommodating flats sharps and naturals of course).

The same table can be used to get the new chord symbols: the G7 should thus transpose to an Eb7; everything behind the chord letter and the optional flat or sharp should be left as is. So a Dm69 will become Bbm69.

That being said, it turns out to be quite a lot of work for an entire score, not to mention the possibility of a mistake or two...

Transposing your tune with MusiCAD is much easier: push the transpose button

Here are a few examples to get different transposing jobs done in more detail.

First you should get to know what the desired key should be. Playing along with MusiCAD makes that quite an easy job. Let's first handle the needs of our aforementioned singer requiring transposition of her song. 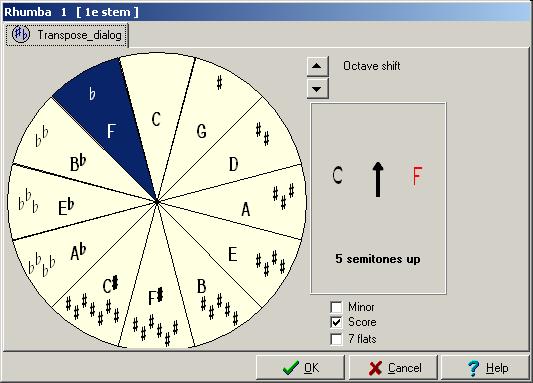 Above you see the original key C (no sharps/flats) and a target key F (one flat) resulting in a pitch shift 5 semitones up.

Ok, reading and playing music written in a key having one flat shouldn't be much of a problem, but what if we were to play using 5 or six sharps or flats. Our singer doesn't care, but violin players typically don't like lots of flats and Bb-clarinettists frown upon sharps... Such cases ask for compromises: use a next-to-ideal key by altering pitch one semitone up (+7 sharps/5 flats) or down (+5 sharps/ 7 flats) so you'll get a more 'playable' key.

Our tuba player needs a different solution. Whenever you are playing an instrument that has 'transposition' built in like clarinet, trumpet or tuba (all Bb-instruments) you can simply use the part modification dialog and select C to Bb to accommodate for the needed transposition. In fact the C to Bb modification will transpose the part two semitones up (adding two sharps/removing two flats) while at the same time instruct the part to sound two semitones lower (just like the tuba player does; he reads a C, plays a Bb, so give him a D and he can play along with real-pitched instruments like a piano).