As soon as you start to play music having only a melody line (and possibly chord symbols with it) you'll probably feel the need for some kind of arrangement.

Assume that you've got a piece of music - let's say a lead sheet only - that you want to get played with an unusual combination of instruments. Now you've got a few options. First try might be to make a copy for every player and hope for the best. The bass player and the guitarist will probably do something useful by looking at the chords, but the tenor saxophone pal, our cello player and the tuba-guy will likely have a hard time. We definitely need something more advanced...

To start simple let's just transpose the lead sheet a bit to accommodate the tenor saxophone. MusiCAD has a script bound to a button

just to do that. In fact that button will call a template script that will add a transposed copy of the main voice, set the instrumentation to a saxophone and create the necessary score view: 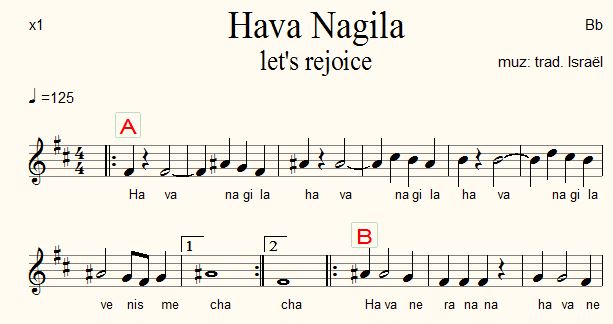 The same part could be used for Bb-trumpet or clarinet as well.

You could have reached a similar result by transposing the lead sheet two semitones up, but then the entire tune will be changed (and sound a note higher). When arranging the earlier approach is much better.

First we will rewrite the lead sheet to something a cello player is more comfortable with: the part should be written using the bass clef and has to be in a playable range. Make a copy of the main voice using the new-part-button and select Copy - unisono. 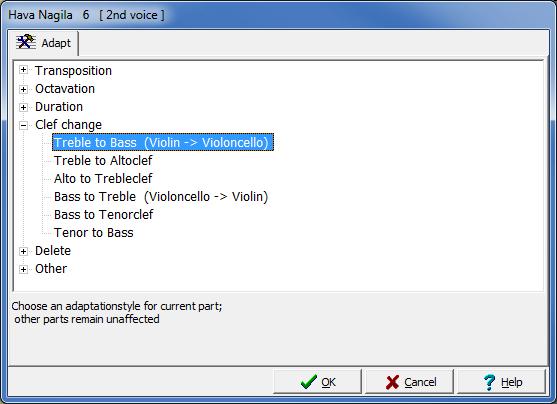 So far so good, but now all parts are more or less the same, apart from the octave used. Our cello player might be an advanced player and could play way more difficult parts if provided for him to read. Fortunately MusiCAD has a script for that situation. Use the cello-part button

bound to <ctrl-shift-F1> that will execute the template script mc-addcello.msj which will generate a broken chord part (more or less) suited for cello: 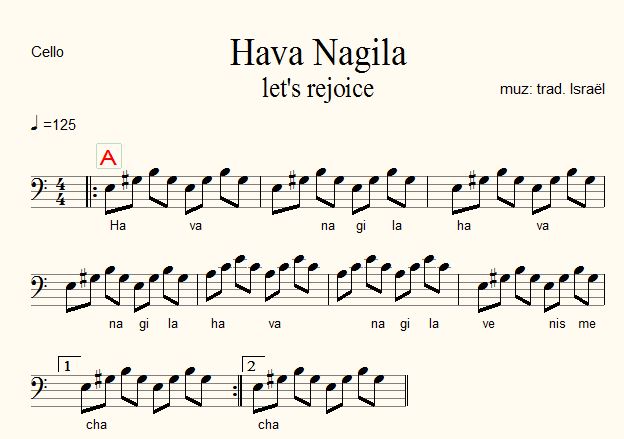 Of course, the result is just a simple rule-based part which might need a bit of editing to add some spice to it.

A tuba usually is written in bass clef and needs to transpose two semitones up. Since it is a low-pitched instrument, the melody line is not the most likely part to be played by a tuba. MusiCAD has a script for creating a tuba-bass line from the chords. The script mc-addtuba.msj is bound to shortcut <ctrl-shift-F2> and thus to button: 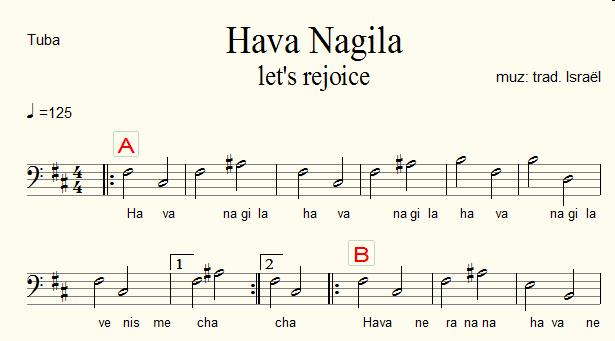 Some more example parts for Hava nagila as supplied with the example tunes.

To be honest, this isn't the most obvious tune, since it uses a not too often used scale, frygian mode featuring a consequent but unusual sharpening of g - the third note - into a g#.

Now let's use MusiCAD arrangement facilities to add a part a sixth below: Select

to add a new part to our tune.

Viewing the results and listening to it:

While doing that in the editor there is one more anomaly to counteract: MusiCAD will not automatically suppress or add accidentals with notes that are tied over a bar-line; as soon as the second g is changed to a g#, everything looks fine for the first note of the second bar. However, MusiCAD still sees a g and no g#, so we'll need a bit more trickery: sharpen the g with <+> and suppress the (usually redundant) sharp with <shift-w>. Since there is one more g to be sharpened (the last note of the second bar) that one needs some special attention too: MusiCAD doesn't assign an accidental because id did already so. We in turn, suppressed the sharp at the first note, but now we have to make the sharp explicit again for the last note in second bar.

Although we had to tackle a few peculiarities in this particular tune, the procedure is quite straightforward.